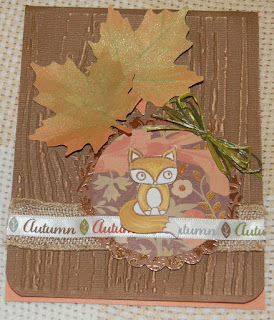 This foxy card began with the cute Imaginisce clear fox stamp ($1.25? anyway, very inexpensive) from Ben Franklin Crafts.  Since it was so small, coloring it with Copic pens was super easy and fast.  Next, to make the fox stand out, I used a scallop circle and a plain circle punch to cut out some glittery cardstock from the DCWV Autumn pack. For the card base I chose a brown and orange color core cardstock and ran it through the Tim Holtz impression folder that looks like tree bark. The impressed surface of the card was lightly sanded to bring out the orange color underneath and the bottom edge was trimmed and the corners rounded. For the maple (?) leaves I used an EK Success punch which was on sale at BFC for 50% off because it was considered a Halloween product (so maybe the punch is a pumpkin leaf).  It pays to check all the clearance items everywhere in Ben Franklin Crafts. I creased the leaves (punched from leftover piece of the double color cardstock) to look realistic and then sprayed them with green and gold Glimmer Mist (Tattered Angels). Finally, the card was assembled with foam dots and Merikan double-sided tape.  The burlap and autumn word ribbon were both from BFC too and added the perfect finishing touch. No, wait, the final addition was the skinny raffia-like three-toned bow which was made from one of my favorite go-to embellishment and gift wrapping items (comes in a large roll from the Celebrations.store)  Somehow fall, to me, is the season of forest animals and autumnal foliage.  This card is dedicated to all the creatures of the woods who hopefully have prepared a safe place to weather out the winter.  Be kind to the animals and to one another during this season of giving. 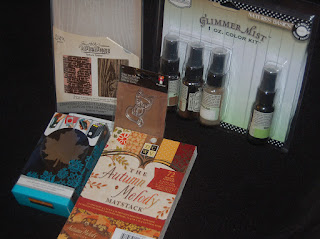 wow you did so awesome on this card..love the leaves and your coloring is awesome..great design..I LOVE IT...

This turned out really pretty Lynn!

Love your "foxy" card in the pretty fall colors.

Gorgeous autumn card, Lynn! Love how you did the leaves and glimmer misted them...looks real! Sometimes, I swear the Hilo store has different things from the PC store LOL! Or, I'm not there at the right time and everything is sold haha!