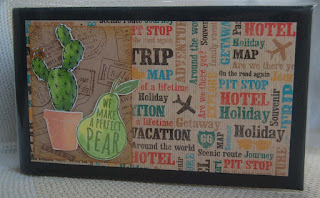 Here is  super simple idea for an anniversary (or birthday or mother's day etc.) card using an inexpensive mini album often found in a craft store clearance bin. The album has a dark green cloth cover and a plastic protective cover that can be easily removed and replaced. I found some travel printed card stock and adhered it to the album front with Merikan tape (from Ben Franklin Crafts), leaving the right edge of the smaller piece untaped.  Next, I stamped, colored (with Copic pens) and fussy cut the pear with words, cactus, and clay pot.  All three pieces were positioned with foam dots. 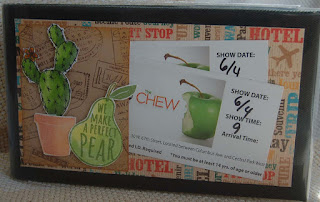 To show you the versatility of having a pocket in the album cover, I placed my used Chew show tickets in it.  (Yes, we attended a taping in N.Y. and I was even introduced on the show for an idea I submitted, plus we won two $75 Target gift cards....woot woot!) I actually plan to put some of our plane tickets in the pocket or perhaps a photo of us...not one of our goofy selfies!  Within the album I am going to put the assorted selfies and food photos we have taken while traveling.  I think it is hilarious to see them all together and eating is almost the only time we remember to take out our camera or cell phone and snap a moment of our lives. 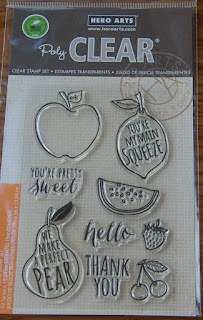 The cactus and pot are from the Hero Arts stamp set I featured in my last post.  While trying to come up with a different anniversary card I was struck by the funny bug and 'paired' together the pear image with the cactus pear image.  I admit it; I am the prickly pear cactus and my husband is 'usually' the sweet pear!  I hope that this post has given you an idea of how you can make an album card too.  It's a good way to send a greeting and collect together favorite photos and memorabilia. Happy Album/Card Crafting !
Posted by Lynn at 8:30 AM

You have such a vivid imagination and think outside the box. Love your cactus/pear card. Congrats on your idea that got you on the show (what show was that?) and winning 2 Target gift cards. How exciting.

You go girl.. way to be creative.. this is such a fun idea.. well done

Hi Lynn!!
I agree with Karen, love how you go outside the box each year for your anniversary projects. This is very fun and a great idea to share those special memories and keepsakes with others. Congrats on your idea for The Chew. What episode/when did it air.