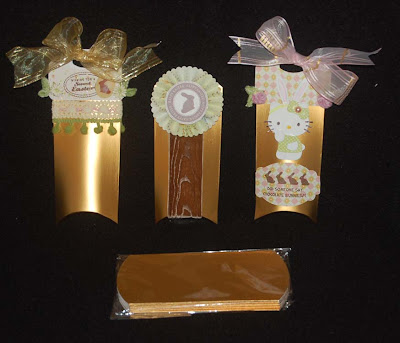 When I first saw the packages of pillow boxes at Ben Franklin Crafts, I was very excited although I had no idea what I was going to do with them. Actually, I purchased them in February for Valentine's Day because there were pretty red ones which I bought along with gold and silver ones. Anyway, as I was moving craft supplies around I was struck by the color and sheen of the gold boxes because they reminded me of Godiva chocolate boxes. I decided to fashion treat boxes for Easter which would have a similar luxury look. I only folded the bottom of the boxes so that I could adhere the Sizzix die cut topper or rosette to the top (see previous posts to learn more about the dies). The stamped images were made using the Studio G $1.25 clear and rubber stamps. The Hello Kitty image was made using a die I purchased last year but may still be available. Also shown in the photo is a pack of 10 unfolded pillow boxes which were amazingly inexpensive. Buying the prefabricated boxes will save you time and let you do the fun part of embellishing. Also please notice that the two outer boxes (click on photo to enlarge) have flowers and leaves on the sides that were made with pipe cleaners (except for the small white Prima flower). The extra skinny pipe cleaners (so many yummy colors!) are also sold (probably near the pillow boxes) at BFC. The reason I fashioned the flowers on the side is because the die cut topper had holes on the sides for stringing ribbon (another design option). I used my slotted paper punch to cut holes in the sides of the box to match those on the toppers. Oh yes, the ribbons were from my stash of recycled pieces as well as new ones from American Crafts (green pom pom and beige crochet). Even if you give only a single chocolate rabbit, presenting it in a special handmade box will tell the recipient he/she is special. Making things special is why we craft, right?

So elegant and cute! I like your creativity in using the skinny pipe cleaners to make leaves and flowers. Adds texture, color and dimension. Thank you for sharing!