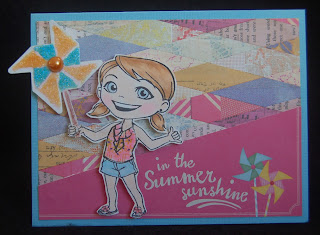 I purchased the summer Fumi and Yumi stamps awhile ago but you know how it goes.....so I finally inked up Yumi.  She was dressed in the type of clothes I wore in the days when pinwheels were 'amusing'. (There were no electronic toys back then LOL!)  When I saw the 6x6 sheet (in the Mayberry pack) with the words 'in the summer sunshine', I knew I had to pair it with Yumi and finally make a summer card. (Where did the summer go?) 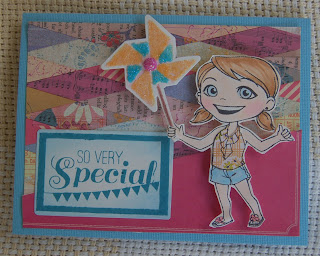 I used the Sizzix rubber stamp and die set (from Ben Franklin Crafts) with the pinwheel.  With a little WOW glitter (also from BFC)and a glittered candy dot, the card got a boost of sparkle.  Because I had extra paper and time, I made a second card and used the 'so very Special' stamp that came in the Sizzix set rather than cutting up another sheet from the Mayberry pack. 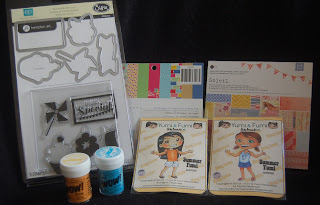 Oh, to make Yumi's hand look like it is holding the pinwheel, I cut the fingers off of Fumi's 'shaka' hand (sorry Fumi) and glued it over the pinwheel stick. The printed quilt-like paper came from a Hero Arts 6x6 pack called Soleil.  Fumi and the pinwheel are raised up on pop-dots and Fumi's blouse was paper pieced.  I still have lots of stamps that have not ever been inked up, so I hope you will return to see more of my projects.  I'm slow but eventually I will use them all, really LOL!  Ahhh, Halloween's coming up....time to make something spooky!
Posted by Lynn at 8:00 AM

super cute! i love that they are holding pinwheels!

adorable.. those little images are so fun..

Cute card, and I do agree back then those comfy clothes were in.... TFS hope your week is going great!

Two cards! Love them both.