I had a few minutes to spare so I decided to do a quick shopping trip at my favorite store, Ben Franklin Crafts, of course! Once in there I wished that I had more free time because I found two racks of new Sizzix die cutters. One display had Christmas die cutters and I chose a snowman border, which I think will make good paper ribbons for small gifts or could be used on an accordion card. I'll show you what I come up with later. The other rack had Hello Kitty die cutters, which instantly mesmerized me. After spending as much time as I could, I finally selected the ladybug Hello Kitty, but I actually wanted all of them. I couldn't wait to try out the new cutters. You can see the result of my first Hello Kitty project. (As with all of my blog photos, you can click on them to enlarge and see the details.) 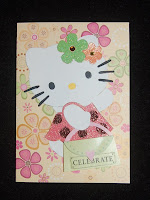 The card blank used was from the Designer Notecard (box of 70 cards) by Nicole Crafts. I cut the flowers and dress from DCWV Glitter cardstock. Just put a small piece of glitter cardstock over the part of that you want the die to cut so you don't waste. I found the dots on the dress hard to cut so I glued on Martha Stewart brownstone glitter instead. I recommend glittering the dress separately before attaching it to the card because the glitter will go into the spaces between the pieces. The little purse is a Mrs. Grossman sticker with rub-on words from Deja Views. The rhinestones were from a multi-colored, multi-sized K. and Co. package. The larger die cut pieces were run through a Xyron machine to apply an adhesive and the smaller pieces were just glued on. The eyes and nose were filled in by gluing small pieces of paper on the back. Oh yes, I cut off the antennae and wings even though I like the ladybug. Many of the Hello Kitty die cutters can be altered in a similar fashion. I don't think I can resist getting more Hello Kitty themed die cutters. I'm going shopping for a longer time tomorrow.....see you there!
Posted by Lynn at 8:26 PM

Hi Lynn
love what you did with your Hello kitty I so want to get me some thank you for the idea one happy crafter :-)

nice craft.
im a writer for a Free Articles directory