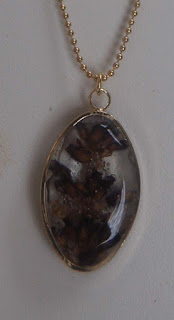 So sorry for the lousy, dark photos.  It was hard to capture the realistic look of the real lavender flowers encased in resin. The first one is the pendant that I am sending to my July born friend.  It is very delicate just like her.  The oval bezel was purchased from HM Ben Franklin Crafts in the resin department.  A piece of wide, clear tape was placed under the bezel before pouring in just a little LED Padico resin and setting it with the LED light.  The light automatically shuts off after about a minute.  Next I added the real lavender and more resin.  Once that is set, more resin is added to form a dome. Then I removed the tape and did the same on the backside.  Since this oval bezel had a bail, it was simple to add a jump ring and string the pendant on a dainty chain.  All findings are from HM Ben Franklin Crafts. 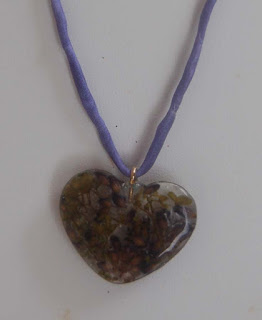 Here is another pendant I made with LED resin and lavender flowers.  It was made in a heart-shaped silicon mold.  The tiny screw eye was a little tricky to set onto the resin heart, but tacky putty helped steady it while I added a tiny drop of resin.  Because the LED resin is quick setting (a minute and no mixing), this pendant was completed in just a few minutes.  I added a lavender silk cord to match the color of the flowers in the resin.

This is what the adjustable back looks like.  I overlapped the cording and hitch knotted it on both sides before putting a dab of glue to secure the ends. I plan to apply some lavender oil to the cording to give the necklace more appeal. 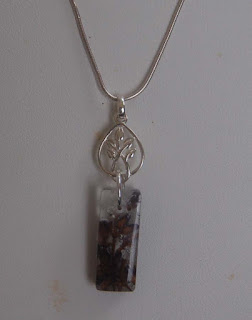 For the third pendant, I decided to try a silicon mold with a hole peg.  Because the resulting hole is rather large, a big sterling jump ring was needed.  I could have just strung the sterling chain through the large jump ring, but I decided a fancy sterling silver bail might be nicer.  Our local HM Ben Franklin Crafts now carries the LED resin and lamp.  I think the resin brand sold there can be set with LED or UV lights.  They both don't need measuring or mixing and set quickly....the UV requires about 15 minutes and the LED just takes a minute!  You really need to try your crafting skills with resin...so much can be created effortlessly! 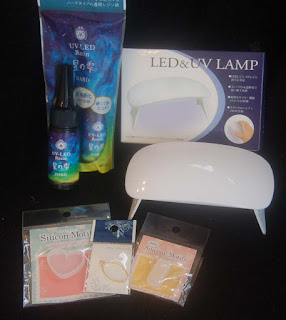 Nicely done! I so want to give this a try!