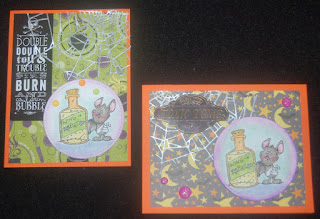 This card was created because I love the Whimsey image so much that I inked it up almost as soon as I got the stamp set.  At first I was going to do a watercolored background but then I realized that I had a gigantic stack of Halloween papers that were begging to be used so I found two prints that worked well with the image. 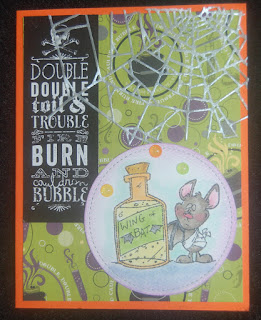 I also discovered in my Halloween box of stuff, a Tim Holtz web die that I had never tried after hoarding it for years.  I used it on silver vellum paper which was great looking but a bit of a bother to remove all the little cut out pieces.  Luckily, one pass trough the Big Shot machine yielded a web big enough for both cards. 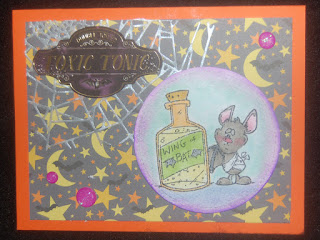 The images were colored with Copic pens and the edges of the circles were rubbed with lavender pigment ink.  The word labels were from my really old stash of Halloween stickers which need to be used up before the sticky backs dissolve...LOL!  For a little more color and sparkle, I added some Doodlebug Designs crystal dots. I guess I really am obsessed with all things Halloween as I have more card and projects rolling around in my head. I hope you'll visit again soon to see what I've created for this season of spooky happenings. 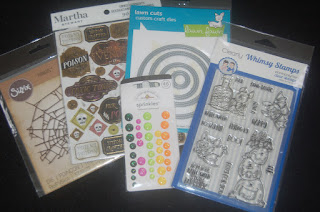 both of these Halloween cards are too cute...