Happy Anniversary to Us! 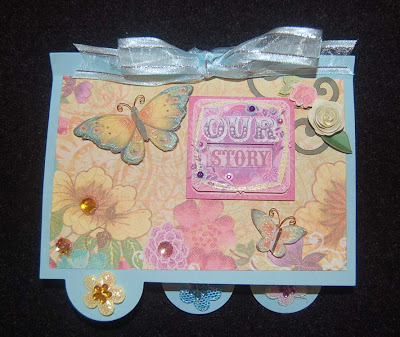 Tomorrow will be our _ _ ? Wedding Anniversary. Now you know that we've been married ten years or more and less than 100. LOL! Can you guess? Were we married BEFORE you were even born? I'll never tell unless you'll believe that I was married at age 5! LOL! Since we have been married for so long I don't even try to find the right anniversary gift. Some years I'm lucky and my hubby needs something that I can afford but this year I've made a card and hope to eventually finish some framed photos that coordinate with my card. The base for this card was cut by a Sizzix Bigz Pro die, 'album pages with circle tabs'. I turned it sideways and decorated the front of the card with K and Co. papers and embellishments. For the inside of the card I used a Sizzix die, 'scalloped circle with pop-up' that has two steps. On the first page I adhered a photo from our actual wedding (hippies in a park!) and the 'Once Upon a Time' words which were made by shrinking words found on some DCWV printed card stock. I sprayed both the photo and words with Tsukineko sparkle spray. 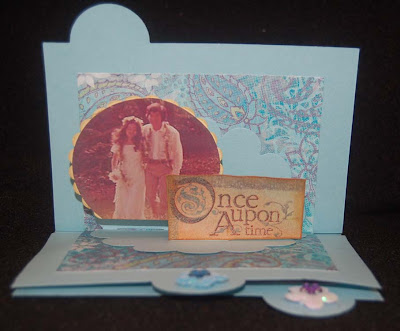 The second photo shows the pop-up die cut before adding a photo and words. I need to hurry now and glue on a current photo of us and the words ' Happily Ever After'. The album pages die allows you to cut and fasten together many pages to make a fatter card or even a booklet. Should I just keep adding a page to this card every year? That would be a time saver but maybe a bit too easy...showing a lack of genuine affection. If there is anytime of the year that I need to express my feelings our anniversary is the day. To you, my dear husband, I will be eternally grateful that you put up with all my idiosyncrasies and craziness with rarely ever a complaint. Happy Anniversary! 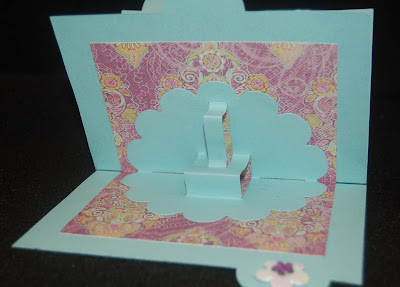 Congrats and many more years to come.. a very cute card.

Congrats on the anniversary!!

Congratulations, Lynn and Wayne! You two are a very special couple and have raised to very special young men!You are all very creative in your own unique ways!

Wishing you both a very Happy Anniversary celebration!

Happy Anniversary Lynn & Wayne!!! He really is a lucky man and so amazing that he never complains. Well I can't figure out how many years its been but by looking at the photo, it may be late 70's or early 80's. You both had long hair!!!

I am a new follower of your blog, would love if you would follow me back,

Congrats and happy anniversary to both of you. LOVE the card, butterfly, and embellies you used.