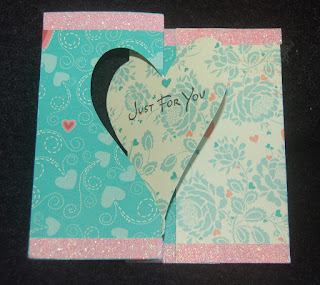 I couldn't resist the new Bo Bunny and Imaginesce Valentine double sided cardstock papers, even though I still have a stash from previous years.  Lots of the 12x12 sheets have heart designs but don't necessarily have to be restricted to Valentine's Day greetings.  I needed to make some gift card holders so I decided to use some of these pretty cardstock sheets which I purchased from Ben Franklin Crafts.  To simplify  construction, I opted to use Sizzix card dies and alter them to include a pocket for the gift card. The first one uses the Card, Heart Flip-Its die.  It was simple work to cut the sheet in half and fold over 2-1/4" of the end of the strip.  By placing this folded edge just inside the right-hand side of the cutting part of the die, a card with a pocket can be cut out.  A little circle punch was used to cut the half-circle in the front of the gift card pocket and the edges were taped down. Simple sentiments were stamped on the front and back of the flip-it heart. Because I accidentally tore the bottom of the heart, I used glitter tape (purchased at BFC) to mend it. I like the look and I think it was a 'happy accident". 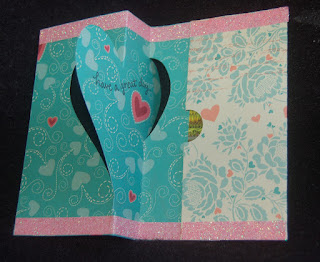 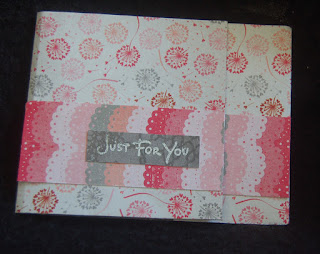 For the second gift card holder I used the Hearts, Winged 3-D (Pop-Up) Sizzix die which I purchased from Ben Franklin Crafts. This die needs to be used with the Sizzix card base die.  As in the previous card, I cut the 12x12 sheet in half and folded the right hand side over 2-1/4" to make a pocket. The folded edge was then placed just inside the cutting part of the die and the die passed through the die cutting machine..Four inches of the left side of the card was folded over.  Next, the inside (the pop-up part) was cut from a different cardstock and trimmed to fit in the card base.  Punch the half circle on the pocket flap and tape down the pocket and inside of the card.  The 'Just For You' was heat embossed on s piece of scrap and that plus other scrap papers were taped to the front of the card. 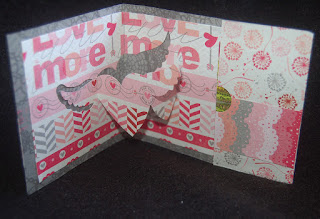 Even though these gift card holders are constructed from Valentine cardstock, they can be used for any reason or season you have for giving a gift card. These gift card holders are so easy to whip up; you'll want to make a bunch of these to keep on hand for quick gifts. Of course, Valentine's Day is a perfect time to let someone know with a gift card treat that you are thinking of them.  Craft and make someone special feel special.  Thanks for stopping to read this blog post. 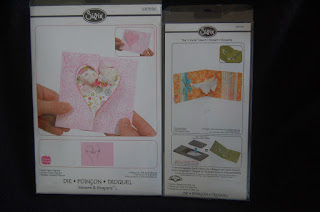 Pretty assorted cards Lynn.. Papers are a must...
TFS - enjoy your crafty week!

Hi Lynn,
Your cards turned out so pretty!!! I like your coverup to the happy accident. I've done that before especially with stamping.

Lynn these are amazing.. I love those die plates.. great cards... Happy Wednesday..

This is so cool, Lynn!