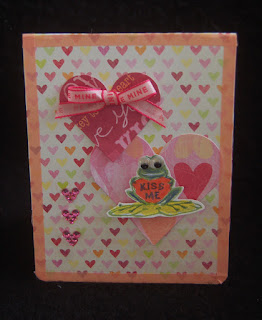 When we were dating (decades ago), my husband and I saw the movie 'April Fools' starring Jack Lemmon.  Ever since then, a frog is the animal we associate with romance.  It seemed appropriate therefore, to use a frog on this Valentine card for my hubby.  The Inkadinkado company had a great frog holding a kiss me heart in their set of Valentine clear stamps which have a cute, retro look. 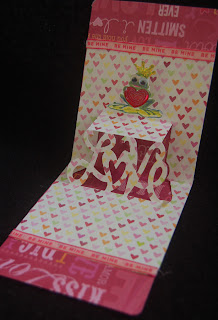 I cut the crown off the frog on the card front and glittered it for the inside frog. (He became a frog prince after being kissed.)  The pop-up 'LOVE' in the card was made from a Sizzix die which fits inside another Sizzix card die.  Crystal rhinestone hearts, a large heart sticker, and ribbons were added for embellishments.  I think the cutest parts of the card are the googly eyes and the spring behind the inside frog.  At the CHA show I made a card which used a wobble spring part.  I liked the effect but since I didn't have any more wobble attachments, I made a spring from thin wire (taken out of a wired ribbon) and taped it behind the frog.  Resourceful and cheap...ah, thrifty...right? Don't forget to make a Valentine card for your honey, even if he is a frog sometimes just keep kissing him, maybe he'll change....someday.  LOL! 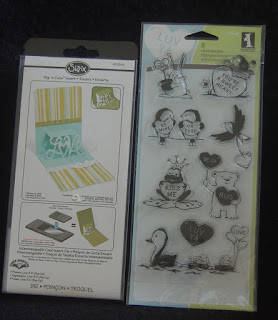 Did you get my package Lynn?