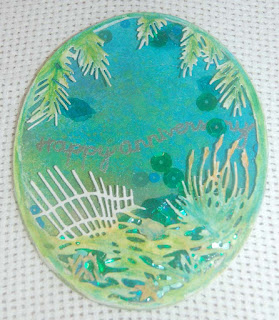 This card is being sent to my sister and her husband who have an anniversary just a few days after ours.  I wanted to make a Hawaiian-ish card since they live in WA and I wanted to remind my sister of her Hawaii roots.  I was short on time (as usual) so I decided to use a recently purchased Hero Arts Fancy die which makes a card seem complicated.  Actually the delicate cuts take only one pass through a Big Shot machine.  At first I thought that I would make a mostly white card with a light watercolored background but after using Distress Oxide ink pads and sprays the background became very dark. (I love playing with the Tim Holtz inks LOL!)  Since I used watercolor paper for the top and bottom of the shaker, it was easy to use watercolor pencils to add color to the delicate die cut top.  I stamped and embossed the words with silver ink and powder (sorry the silver sparkle doesn't show up well in this photo). The clear sword stamp is flexible so I was able to arrange the words in a curved shape, but I still had to cut off some of the coconut fronds so that all of the words would show.  A die cut acetate oval was glued behind the die cut scene. To create the channel behind the acetate, I cut another oval from a thin foam sheet and then cut out the interior leaving only an eighth inch border of foam which I glued (with 3 in 1 Beacon glue) behind the acetate oval.  In hindsight, I could have probably glued a thin cord behind the acetate to form the channel.  The whole shaker oval was adhered to a white oval card that was formed by cutting two ovals and double-sticking just the left edges.  Oh yes, don't forget to put the sequins in the shaker. I discovered that HM Ben Franklin Crafts has lots of really great sequin packs like the brilliant blue green one that I purchased...sorry my photo didn't capture the cool heart and leaf sequins. Well, that's it for this post...gotta write a message and send this card off to my sister. 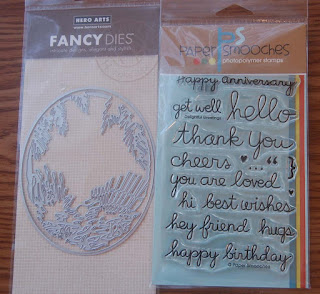 Very tropical colours. So pretty! I'm sure your sister would love it!

aww it is perfect.. i know your sister will love it..

This tropical anniversary card turned out beautifully. Love the blue green colors and the matching sequins in your shaker. For me, shaker cards always seem to take longer to make than I ever anticipate. Your idea of using cording to create the channel sounds interesting! If you ever get a chance to try it, let us know if it's easier to do!