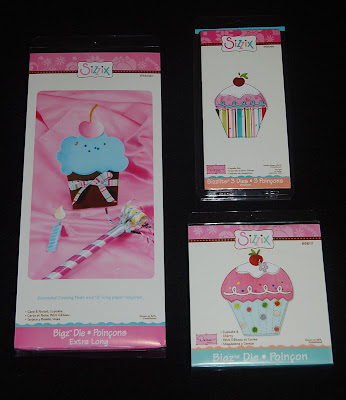 Wow! I was super excited when I saw that the new cupcake Sizzix die cutters had arrived at Ben Franklin Crafts. Of course I purchased all three of them....the large cupcake card, medium cupcake and small Sizzlet cupcake. At the same time I finally bought the monkey die cutter which I had debated about for a long time. Monkeys are so cute and this die matches many of my rubber stamps. I also just had to get the Dandelion Designs monkey with the gift and the words "A little something for you" because I knew they would work well on the card I was planning. 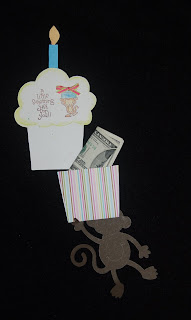 The papers I used for these cards are from Doodlebug Designs (some of them are glittered). I chalked the monkey to make it more furry looking. The cupcake card with the heart brad was designed to be a party invitation. To cover the black paper behind the monkey eyes and nose, I cut out another head and glued it on but you could glue on a whole monkey and that would make the card even sturdier. The cupcake card can be used to hold a gift card or money. I will be working on projects using the other cupcake dies and perhaps I will find the time to write up this monkey cupcake card project and put the instructions on our craft club website (www.bfcraftclub.com). (Since the monkey cupcake card is rather large, I used a 12x12 sheet of scrapbook paper to make an envelope.) 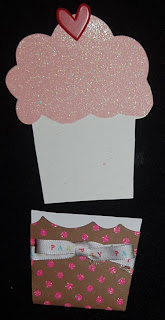 Oh, don't forget this weekend is the time to use your 40% off coupon at Ben Franklin Crafts!