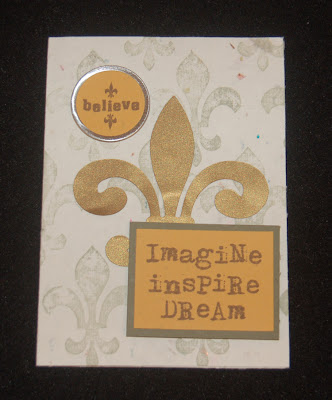 As usual I needed a special card...pronto! It was for someone receiving an Eagle Scout award. Congrats Aaron! The only items I had in my craftroom that even vaguely suited the project were ones with the fleur de lis design which sort of looks like the boy scout emblem. So with two rubber stamps and a Sizzix die, I began to stamp and cut. Using mustard and olive green colors also helped to unify the card theme. The final touch was the circular tag made using the Making Memories metal rim and tag making system....remember, you probably bought one and it's tucked away somewhere.....take it out and make some new embellishments. Anyway, I just wanted to show you that sometimes when you are short on time and don't think you have the right supplies, you can still whip up an appropriate card. Never ever buy a card.....that's a crafter's no-no!

OMG, love this card. You are absolutely right! We all have those metal circle tags stashed somewhere. lol. I think that your scout will love it! TFS!