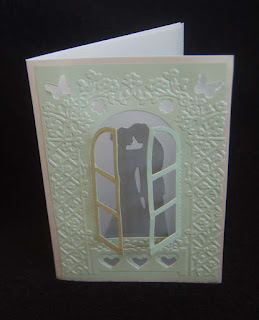 This card was made for my son and his beautiful bride, Traci.  It came together rather quickly due to the new Xcut die, available at HM Ben Franklin Crafts. This window die has the ability to emboss and cut in one pass through the Big Shot.  At first I didn't think the folder would do what it promised but it did work well.  I suppose I should have cut the pearlescent mint green paper ( Paper Accents) separately from the pearlescent white card (from old stash) but I was afraid that they would be hard to line up later. (The green paper was not big enough to form the whole card.)  This double thickness of paper proved difficult to cut through requiring several passes through the machine, but I was patient and success was my reward! 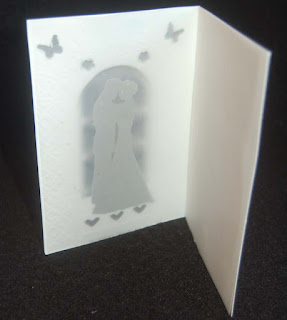 Because the wedding colors were mint green and grey, I decided to die cut the couple (Marianne design) from a shimmer grey paper  (DCWV 6" paper pack) and adhere it to the back of the window. The bottom of the dress had to be trimmed so it would not block the hearts. Finally, a piece of vellum with sparkles was added to the inside of the card to give it a misty look and cover a handwritten message. I was very pleased with the outcome of this card and hope that it pleases the newlyweds too! 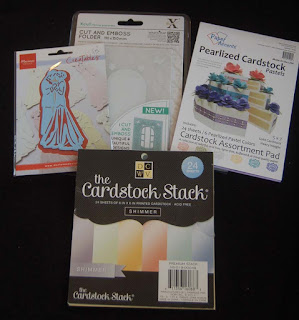 Hi Lynn, congrats to your son and dtr.-in-law on tying the knot. You made a very beautiful and elegant card for them. Bet they were in awe. Have a wonderful and crafty weekend.

Your card is stunning Lynn! What an elegant card, perfect for your son and daughter-in-law! Congratulations to the happy couple and to you and your DH as well!