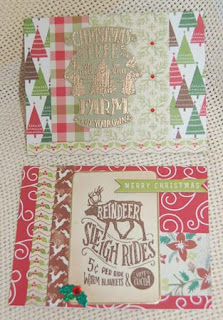 These two cards were inspired by the Whimsy clear stamp set called, ATC Sleigh Rides.  I really liked the vintage look of the signage-like stamps.  I had fun finding just the right color and print of paper scraps to add to and compliment the main images.  The Xmas printed blank cards were from a boxed Xmas set  I bought (last year?) at HM Ben Franklin Crafts. There will probably be boxed cards again this year at the store. 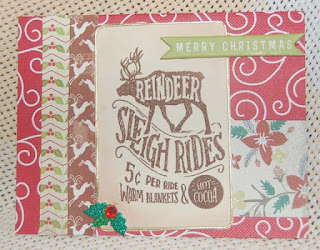 Of the two cards, I like this one the best because of the reindeer image and the 5 cents.  I was happy to find a small strip of leaping reindeer paper to add to this card.  In my paper scrap pile I found an old foxed card with a gold rimmed blank panel.  I'm so glad that I didn't throw it away because it was perfect for the vintage look of my new card. 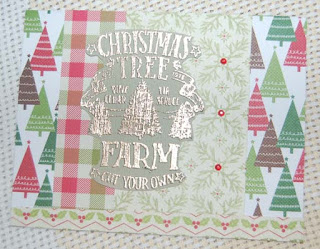 This angle shows the Christmas tree stamp in a better light. I heat embossed the words with Hero Arts brass embossing powder from HM BFC.  I used the Misti stamping tool to ensure I could re-stamp the image if it wasn't clear enough.  Actually, I originally stamped the image in dark green but it looked too dull so I re-did it by stamping again and heat embossing the brass colored powder.  I was pleased that one of the printed card blanks had Xmas trees on the front that matched the stamped message. These cards really reflect who I am.... a lover of vintage/antiques stuff and an anti-waster/hoarder of paper scraps. LOL! 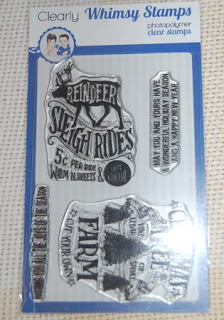 Gnome for the Holidays

I love this Whimsy gnome stamp set because the gnomes look like shrunken Santas.  I usually get matching die sets but the dies for this set did not cut out the intricate parts so I decided since I would have to do so much fussy cutting I really didn't need the dies anyway.  For the slimline card I started with Lawn Fawn snowflake card stock...love the silver foil snowflakes!  The moon was cut from DCWV pearlized cardstock and the 'Believe' was cut from silver DCWV foil card stock.  The dot on the 'i' was replaced with a crystal rhinestone which is not really red but multicolored. 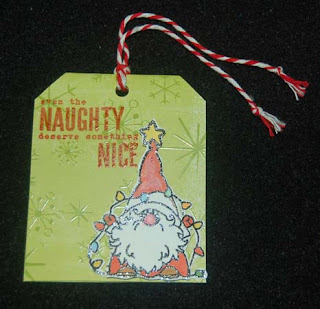 Of course, I had to make a tag with the leftover paper and cut out gnome image.  The words were heat embossed with Ranger Distress sparkling campfire embossing powder.  Candy cane twine from HM Ben Franklin Crafts added the finishing touch.  I know exactly who will have this tag tied on his Xmas gift...LOL! 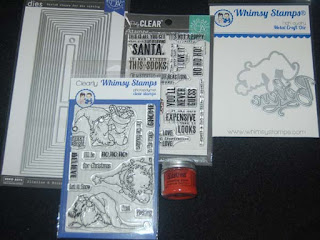 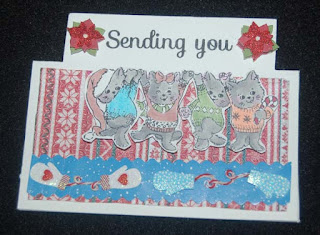 I really, really liked the Art Impressions stamp and die sets.  The kittens are so cute and Christmasy in their winter sweaters.  I was also fascinated by the way the card opened to reveal the rest of the message and the backs of the kittens. How clever is that!  The instructions for the card were on the packaging but either the Ai instructions were misinterpreted by me or they gave the wrong measurements.  In any case, I had to a resize the card to make it work.  To fill in the unbalanced spaces, I added some do-dads from my Xmas stash.  Oh yes, to add to the Christmas sweater look, I ran the Whimsy embossing plate over the striped card stock. The texture is super cool...it looks and feels like something knitted. 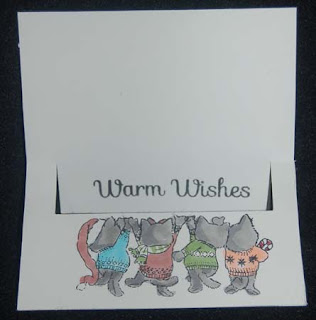 The flip side of the card with the kitten backs turned out fine and they really look like they are holding up the sign.  I know that I will make use of the kitten stamps again because I can see all kinds of possibilities for them even without the die cut flip part.  Although this card did not turn out as I had hoped, it still was interesting to work on it and I have lots of new ideas for cards.  Isn't that what creative crafting is all about?  So what are you making today? 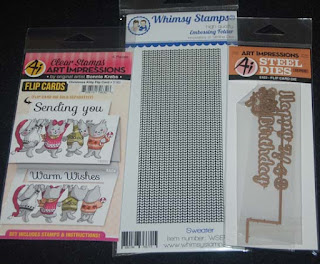 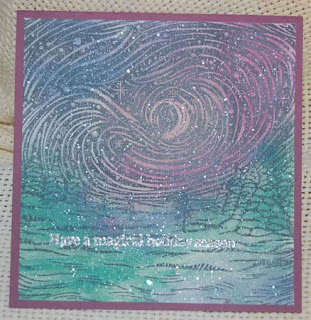 When I saw these two Hero Arts Bold Print stamps, I was immediately drawn to them because they reminded me of old Japanese block prints. With that in mind, I experimented with colors, inks and stamping techniques and came up with these three cards. The looks are really limitless.  Mostly, I used Ranger Distress Oxide inks, Memento Permanent Inks, and flicked on silver Liquitex ink. The words on this card are actually readable but the glare on the sparkly silver embossing powder distorts the letters when photographed. It says, 'Have a magical holiday season.' 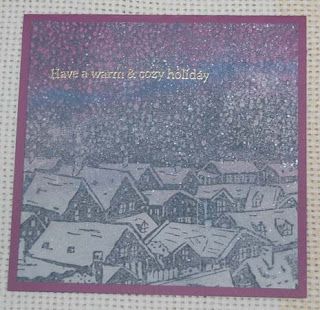 This card with Nuvo platinum embossed words is more subdued like the old style Japanese prints. 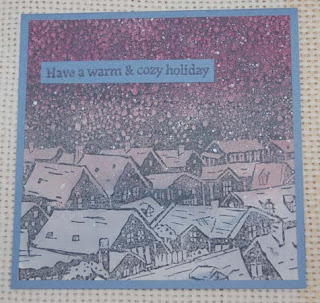 For this one I used a strip printed with the words to cover up the 'too bright' white heat embossed words.  Nothing gets wasted in my craft room!  Even the 'less than perfect' stamped papers get turned into tags or small cards. Keep holiday crafting and repurpose/recycle everything! 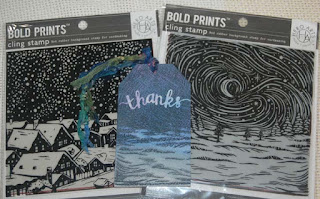 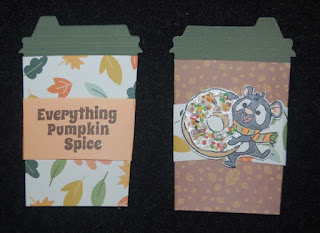 Here are the front and backs of two gift card holders I made for two coffee loving friends.  I used an Art Impressions die to cut out the cups and all their parts.  I think the take out cup gift card holder was supposed to be attached to a greeting card because the set only included dies for front parts. 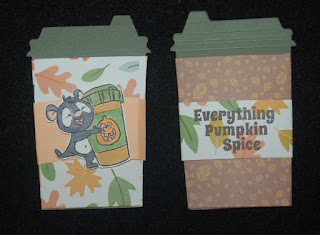 It wasn't hard to use the dies to cut parts for the back of the card holder.  For the bands, I just wrapped  strips of coordinating card stock around each cup and glued them in the back covering the seam with a fussy cut character. 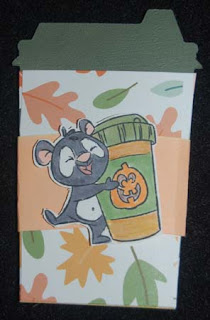 The Whimsy stamp set called the creatures pandas, but I don't think they look like panda bears at all. They are cute though so I colored them like tail-less lemurs? grey gophers? or maybe they are a hybrid of animals in my fantasy brain. LOL! 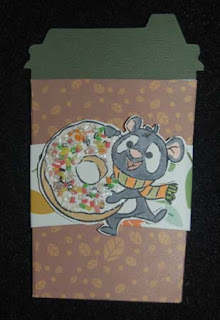 For some texture and color I glued on some fake candy sprinkles to the doughnut using Bo Bunny pearlescent white paint which comes in a tube with a small tip. 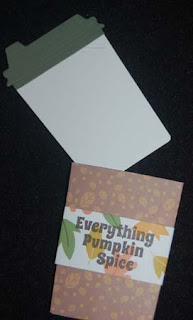 I  die cut two cup lids to go over the white die cut inside card and glued them on either side of the card.  This card has room for writing a message and two slits for holding the gift card (to a coffee shop, of course).  Two die cut sides glued together to form the cup, snuggly hold the card.  The Ai stamp set has several stamps and dies to create card holders for other occasions.  I like the realistic list check-off stamps and medallion dies. 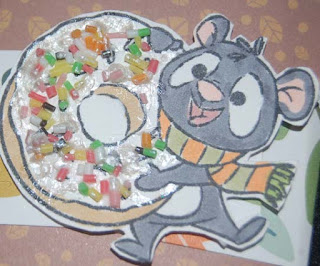 I know that I'll make good use of The Ai set because I like giving gift cards...easy and useable for coffee loving friends. Next time I think I'll try just attaching it to a card...maybe for Valentine's Day....gotta plan ahead right? 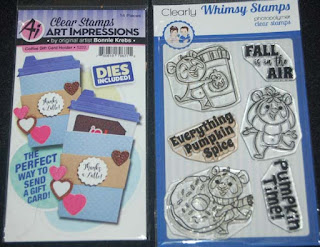 Autumn Card - 'Change Can Be Beautiful' 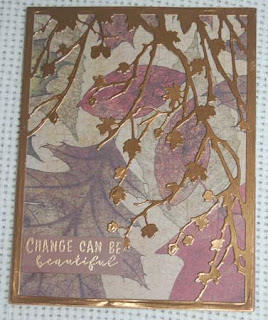 When I first spied the Hero Arts branch frame die, I loved it!  I didn't know what I would create with it but I wanted to accent the graceful lines. I decided that simply using the die to cut foil card stock DCWV (copper) would have the effect I desired.  By layering the die cut piece over a leaf print card stock, I was able to achieve a pleasing floating leaves illusion.  Hero Arts also had a stamp set of fall sayings from which I chose my favorite and heat embossed it with Hero Arts bronze embossing powder. 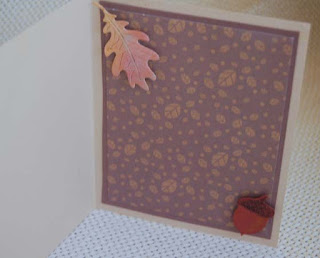 I had a boo-boo on the inside of the card so I covered it up with extra card stock and some HA die cut pieces. Saved!  I hope this simple card encourages you to try the gorgeous Hero Arts autumnal designed products. Celebrate the season of change, gathering and giving! 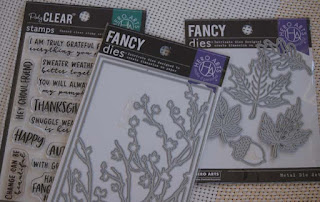 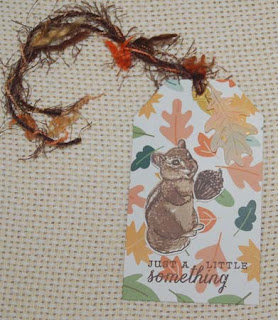 I had a good crafting day because I got to play with some new Hero Arts stamps and dies AND the tag that I created actually looked almost exactly like the one in my mind's eye. Yay me!  I started by cutting a large tag using a die from the Infinity tag set.  Although it is barely visible, I added a small hole embellishment by cutting a scrap of gold paper with the die that comes with the tag set.  I think this little touch really gives the appearance of a metal eyelet.  The Hero Arts layering color stamp set makes coloring the chipmunk and acorn a snap especially if you use a Misti tool to align the parts. Also the matching chipmunk die saved me lots of time so I could easily make multiple tags. 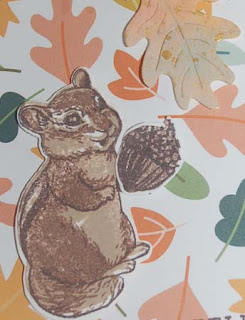 This close-up photo shows what I really love about the stamped coloration which sort of looks like old fashion printed book illustrations.  Also, you can see the detail of the Fancy die cut Hero Arts leaf which was cut from some hand dyed and gold speckled paper that I had in my scrap pile.  (I think I chose the right leaf...acorns become oak trees right?)  Finally, I had fun choosing just the right fancy yarn that would give the tag a woodsy, natural look. I hope this post inspires you to create your own autumnal tags and cards. Happy Fall Y'all! 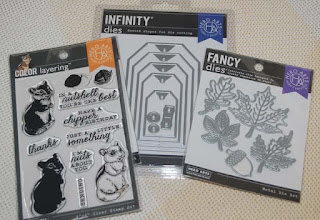