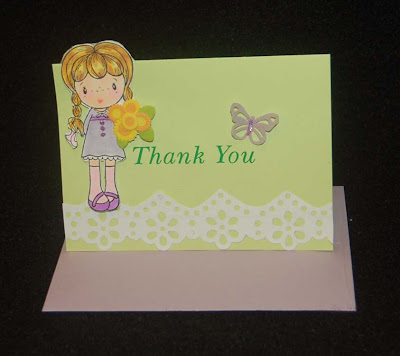 I needed an excuse to play with my newest craft toys and supplies so I hid in my craftroom for a few hours saying, " I'm working on my thank you cards". This first thank you card has the head of the girl sticking up because I realized that if I centered the figure the flowers would block the words. The words couldn't be moved because I started with a pre-made plain thank you card. (I bought the cards in bulk when they were on sale.) Anyway, after coloring the girl with markers the back of the paper showed the marker ink so I couldn't just glue her down. I decided to trace the top of her head on the back of the card and use a craft knife to cut it out. Next I folded up the head top, glued the girl to it and put some pop dots behind the rest of her body. On the original rubber stamp the girl was holding roses but didn't like them or the way that I colored them so I covered the flowers with stickers that I found at Craft in the City. The lace border was made using a new Martha Stewart punch. The butterfly was also made using a MS punch and a sprinkling of glitter. 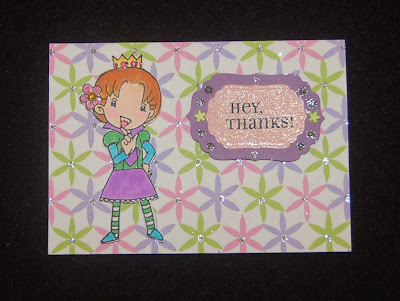 This second card also started with a rather plain pre-made card that had some glittered accents. I liked the sassy girl image. I put her on pop dots so she would stand out even more The Spellbinder dies were used to frame the rub-on words. Silver Stickles (sorry the camera didn't catch the sparkle) and flower brads were added for more bling. Both of these cards were simple to make, but more importantly they were fun to create. If you make your own thank you cards you can tailor them to the recipient and it makes writing thank you notes more enjoyable. A handmade thank you card says, "THANK YOU" loudly so it won't even matter if you are not an eloquent writer. Now, get going with those thank you notes.....don't put it off.....MOM said so!
Posted by Lynn at 12:44 AM