Last month my husbnd gave me a cute anniversary card in which Mickey Mouse moved towards Minnie and gave her a kiss. I was of course fascinated with the paper mechanics of the card (oh, I did appreciate the card as well, LOL). Although I did not rip apart the card, I did pull it apart a bit to see inside. Anyway, this card is the result of several days of effort to make a moving card. 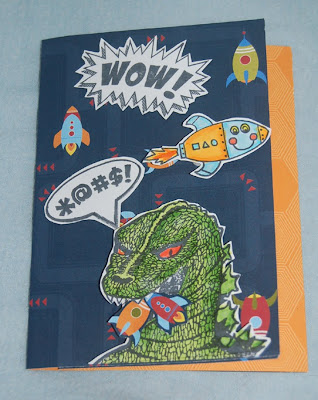 The outside of the card has sort of a comic book look because it is a birthday card for a comic book, Japanese monster figure, and robot fan. Unlike the Mickey card, mine has a border on the right side because I wanted to add some contrasting color. As it happens, the Bo Bunny 12x12 double-sided card stock works out perfectly for this card. The images I used for the card front are from a Hero Arts clear stamp set (rocketship), a wooden handled Godzilla rubber stamp from Viva Las Vegastamps, and the bold words came from a clear stamp set (I can't remember the maker's name). 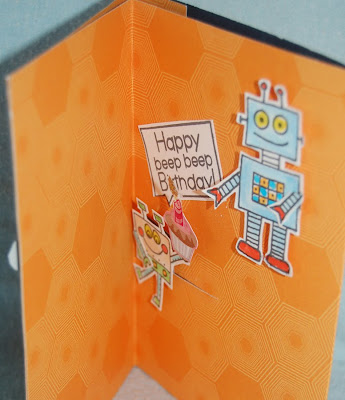 Here is what the inside of the card looks like before it is fully opened and the robot figure is to the left. Once the card is opened the figure with the cake moves to the right, presenting the cake to the other robot. The robot figures, words, and thought bubble are images from a Hero Arts clear stamp set. I used Copic markers to color all images used on the card. 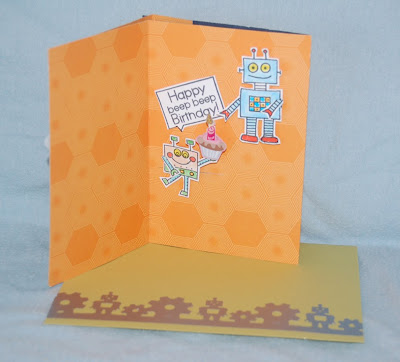 I had originally planned to use the robot/gear border punch (EK Success) strip (metallic silver paper) on the card but couldn't fit it in so I placed it on the envelope. Although it will take me awhile to write up the directions for the card, I will try. It's not really difficult to make but I have a hard time explaining things with diagrams and photos. Have a great Labor Day....only do those labors that you love doing.....like crafting!

Wow Lynn~
This is a neatto card... Luv how everything moves on it... Cute images too.
Hope you are enjoying your weekend...

So cool!!! i think you'll have to do a project sheet! hint, hint! heheh!

Wow, what an interactive card Lynn! My husband buys me those too but I never thought to sneak a peak behind and see how its all done. Haha!

OMGosh, this is a GREAT card Lynn! Love the outside design and the inside idea is awesome! Yes, would love to see your tutorial on this! TFS!