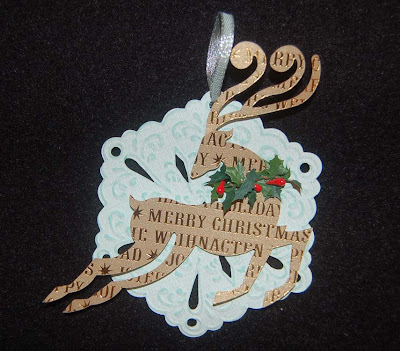 I don't mail out as many Christmas cards as I did in previous years, but I still like to make fancy tags. When I discovered these two Christmas Sizzix dies at Ben Franklin Crafts, I knew they would make fantastic tags because of their fancy shapes. The reindeer was cut from a K and Co. paper which had a warm golden color and foil words. It was adhered to the snowflake die cut with an artificial holly sprig (sold in a roll). The snowflake was cut from whitewashed cardstock which was embossed (using the folder which came with the Sizzix die) and lightly sanded to reveal the pretty pattern. Because the snowflake has cut out holes, the holly sprig and tag hanging ribbon (Martha Stewart) were easily attached. Although the reindeer can mostly be used for holiday decorations, the snowflake is very adaptable for other occasions because it looks like a hexagonal doily. Have a crafty weekend! 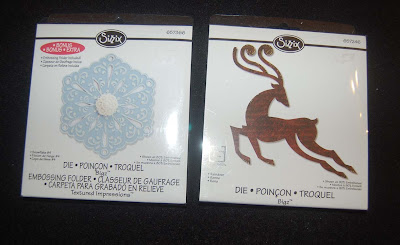 Oooh Lynn I really enjoy this reindeer tag.... It's really pretty!
To pretty to put on a gift....

So pretty Lynn! Oh my, I've been looking at that snowflake and thinking that I needed to get that one. Love your reindeer!

Hi Lynn,
Love how you incorporated both dies together to make a beautiful tag. Awesome.

Oh no, you're so bad Lynn, LOL, another item for my wish list! Beautiful tag, I really love that reindeer!