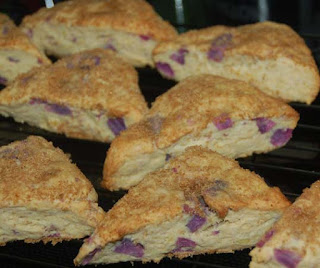 These odd looking scones are my adaptation of a sweet potato scone recipe I found in Tea Time Magazine.  I replaced the pecans with chunks purple sweet potato. The recipe already had pureed sweet potatoes (I used white sweet potatoes for the puree.) which intrigued me.  I wanted the scones to be sort of like the ones I ate in Japan.  The recipe called for 1/2 cup heavy cream and more if needed. I ended up needing about 3/4 cup because the dough was so dry.  The resulting dough was rather heavy and play doh- like so I didn't have hope for the end product.  However, the baking aroma was enticing and the final scones were not only pretty and light, but delicious too! This time I added a sprinkling of nutmeg but I think in my next batch I will add chopped candied ginger instead of the powdered ginger which could not be tasted.  Experimenting with recipes is sort of a hobby for me. My husband says it's the scientist in me. I agree except that my experiments are edible...usually. LOL!
Posted by Lynn at 9:00 AM

Where is the recipe?